Of Marilyn, Tavel, and the Colour of Love 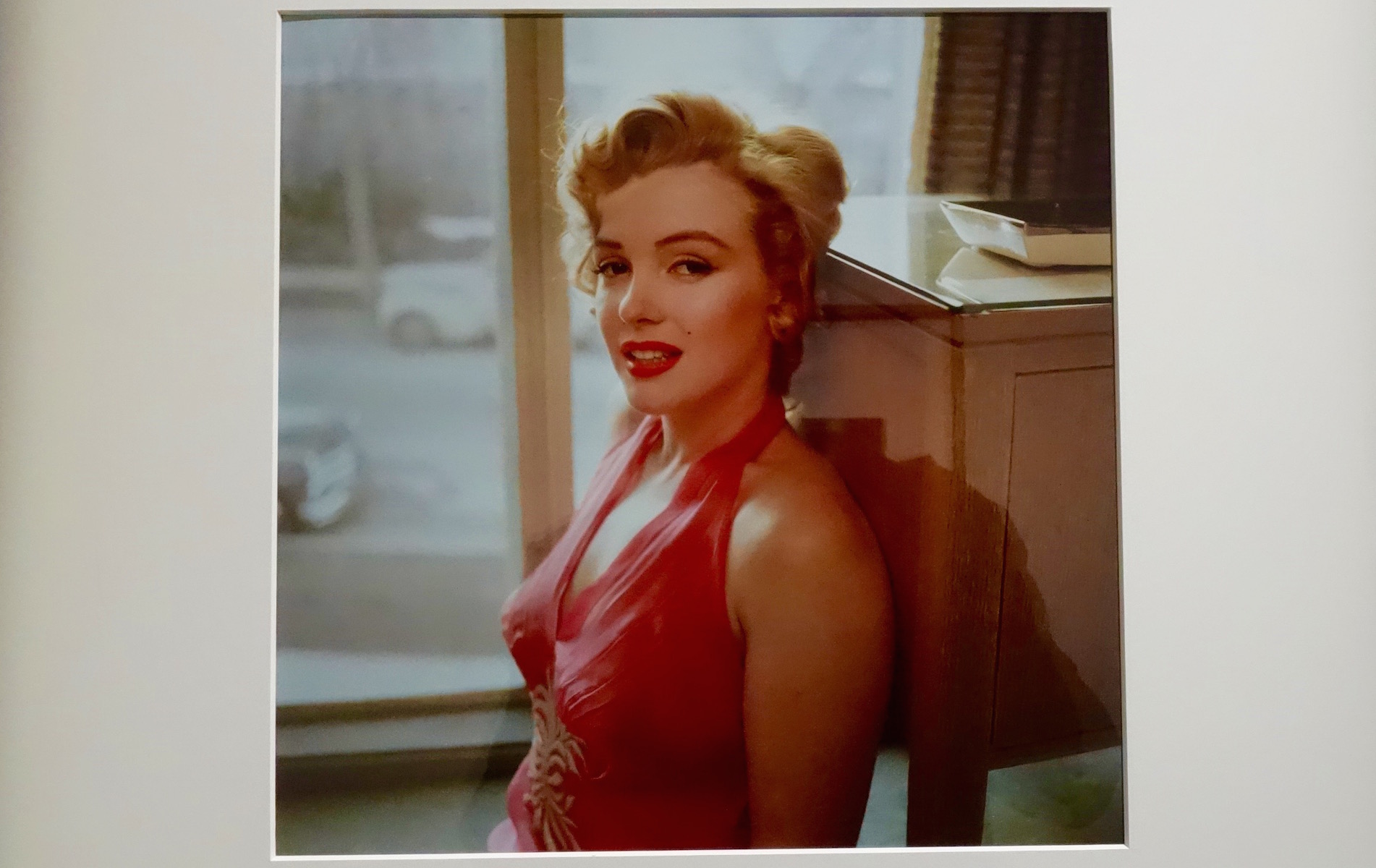 Paris – It was like an apparition, the photograph of Marilyn Monroe. Her regal features: the Bambi eyelashes, the moist parted lips, the seductive open mouth, a vulnerable and welcome glance, and the slow-burning sensuality of America’s sexy waif-goddess.

The vivid colours – rich hues of ruby, raspberry and cherry – bathed me in the warmth of life, rising up like glowing flames whose images rained over me like a first love affair. Then, suddenly, it came to me, an epiphany: Marilyn Monroe is a rosé incarnate, a Tavel rosé mind you, the most carnal of all rosés. What they share, Marilyn and Tavel, is an archetypal beauty evoking the colour of love.

On your palate, Tavel rings with berry and cherry flavours, with a hint of Marilyn’s lustiness triggered by a velvety spiciness. An elegant discreet ‘nose’ greets you with aromas of berries, dried flowers, peach, tangerine and rose.  The latter is a heart note of Chanel No. 5, Marilyn’s favourite fragrance.

Tavel wines once wetted the lips of Popes, who resided in Avignon in the 14th Century rather than in Rome. The parched scrubby landscape and worn sun-bleached structures are like a ghost of an earlier, more glorious world.

Centuries have bleached the inexhaustible stones of Provence, yet Tavel brings forth with each new vintage a gleaming rosé of irresistible rapturous sensuality, an aura of Marilyn’s purest beauty. When stationed on a Provencal table along with a few roses, the bottles shimmer with an amorous, muted raspberry glow. 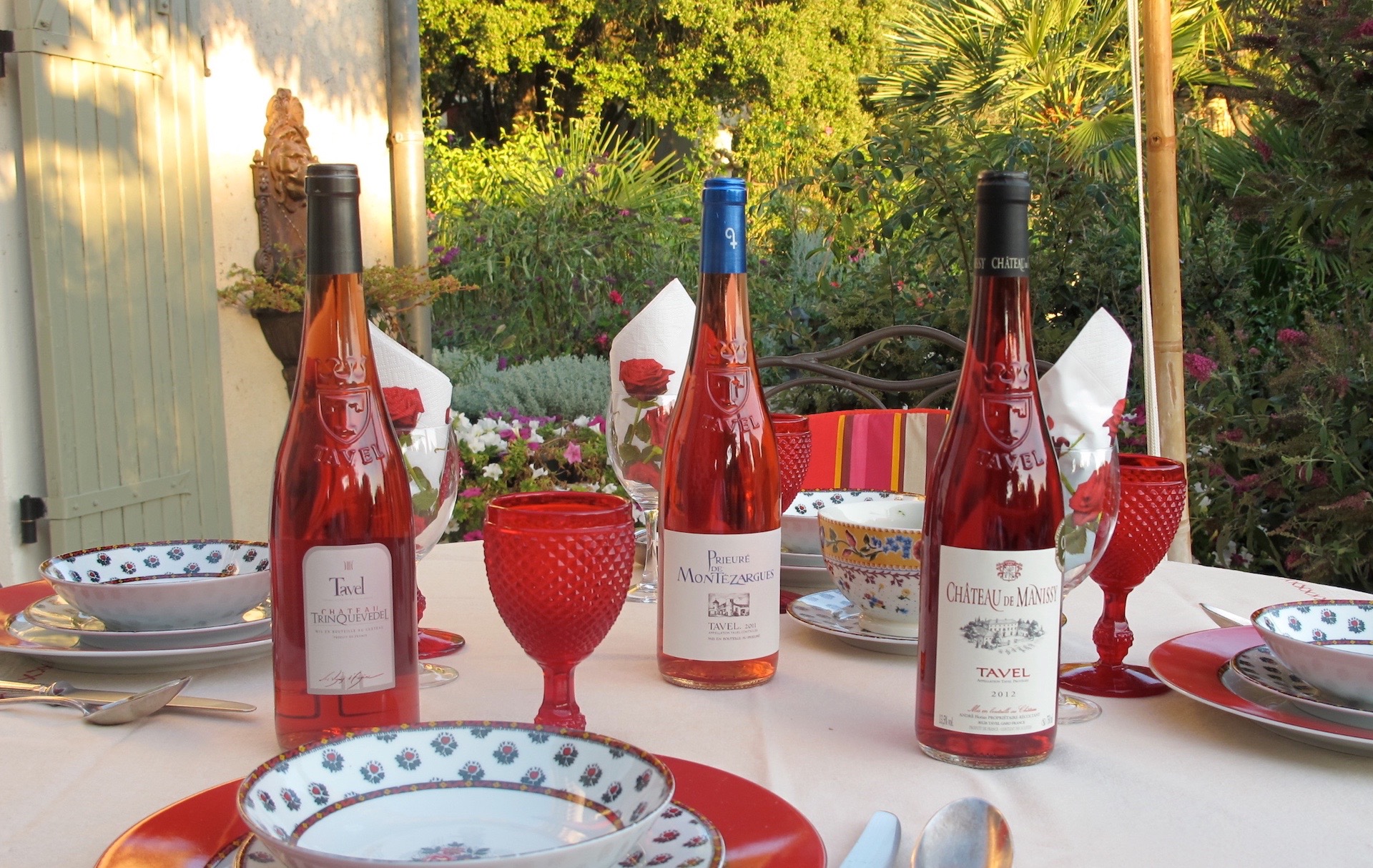 Three Tavel wines whose properties date to the 14th Century

The voluptuous color of Tavel is born from a centuries-long tradition, a vinification process unique to the appellation.

The so-called cold maceration is the softening of grapes by soaking. The soaking endures from 12 to 48 hours, whereby the color, flavor and tannins are transferred from the grape skins to the wine juice. The weight of the skins and the must release the ‘free-run juices’ that are drained off into a vat.

Then, the juices are separated from the skins by a light pressing of the grapes.  The free-run juices contribute aromas, fruit, and acidity, with the pressed juices providing richness, structure and color.

A temperature-controlled alcoholic fermentation lasts about 20 days in cement cuves, followed by the wine being aged in enamel-lined, stainless-steel cuves for 18 to 20 months.

The result: a rosé more powerful, more tannic and darker than other rosés. The trend today is to produce blends that are a lighter shade of pale.

Some producers tout the absence of color in a rosé as modern-day hip sophistication. They go further. Paleness connotes quality, so they say. Don’t be taken in. These blends are mere whispers compared to the clean whistle of a Tavel rosé.

In many appellations, rosé is made from parcels of lower quality, whereas in Tavel – the only appellation in France devoted uniquely to rosés – winemakers include grapes from the mature parcels in their blends.

Tavel winemakers choose from among nine grape varieties (cépages) for blending vintages, with Grenache the predominant grape (up to 60%).  Tavel rosés do not require guzzling before the summer fades; their structure allows for a year or two of cellaring, their freshness ever present.

Enriched with smooth tannins and lingering spiciness, the rosés of Tavel are a gastronomic delight. Marry Tavel with grilled fish and chicken dishes, Asian cuisines, ratatouille, a goat cheese salad, and Provencal cuisine.

There’s more to Tavel than a late afternoon insouciant buzz. It is a rosé enjoyed “a table” in the soft darkness of limpid nights, flooding your palate with the immaculate flavors of the sun-drenched terroir of Tavel. 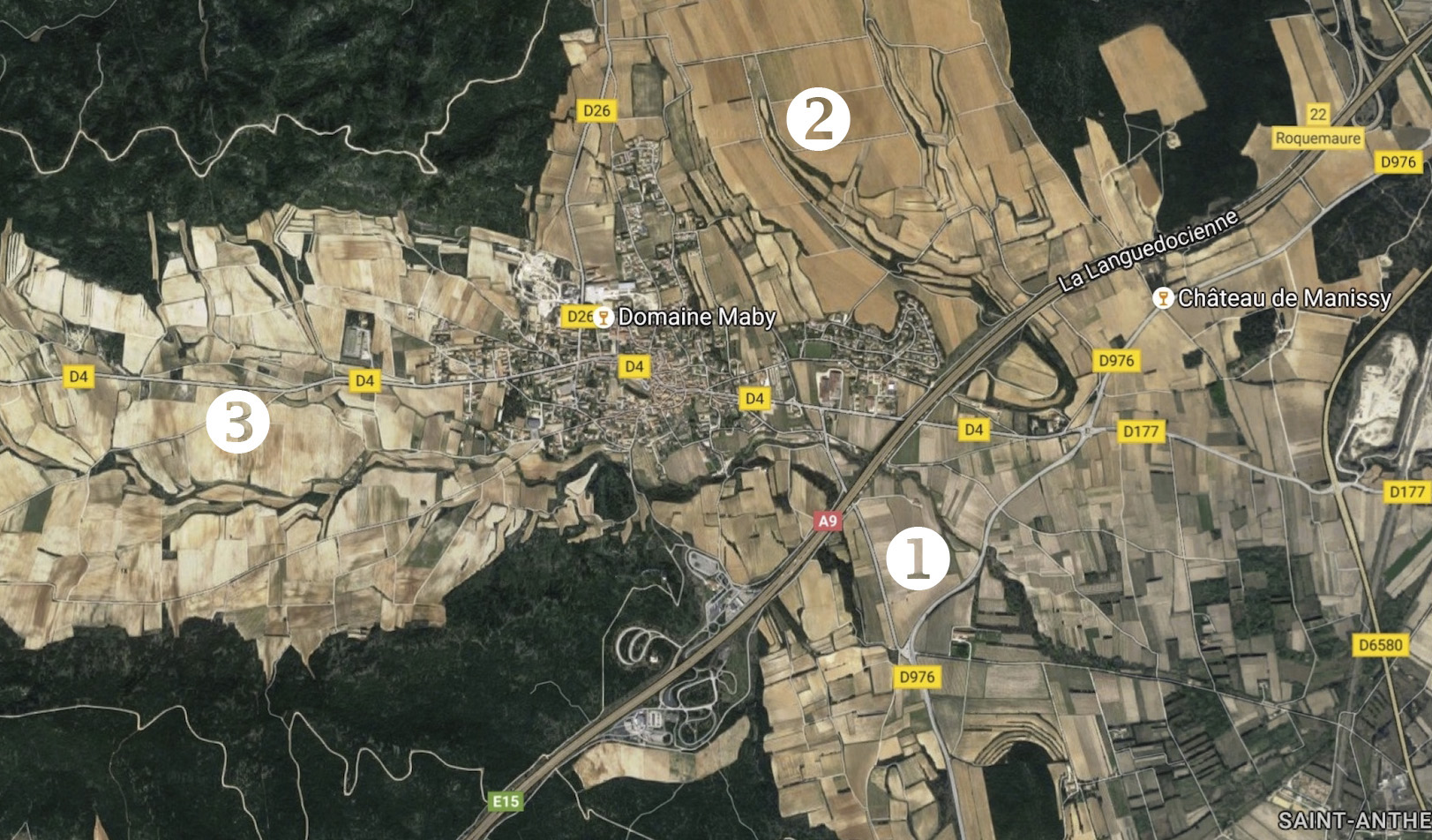 Tavel, a tidy tract of 2,300 acres on the west bank of the Rhone. Marginally higher and somewhat drier than Châteauneuf-du-Pape (CDP) to the east, Tavel would have yielded red wines lighter than CDP. Consequently, rosés offered a promising niche.

There are three terroirs in Tavel: each of which has distinct attributes of soil, stone and mineral deposits, each of which contributes to the richness of the Tavel cuvées (blends).

Olivet (1): A terrain on the map of gray greenish hues lying to the southeast of the village where the oldest estates in Tavel first cultivated vines on the accessible terraces and gentle slopes of light and permeable sandy soil with small pebbles. This terroir produces wine with a smooth texture,  subtle aromas, and a strong bouquet. Yields are higher and alcohol is lighter than wine of the other two terroir.

Vallongue (2): North of the village, this terrain appears in brownish tones on the map, sharing with neighboring Chateauneuf-du-Pape the “galets ronds” – the round quart-sized pebbles brought by the Rhone during the Quaternary era. Wines feature higher alcohol, distinct pigments, and a firm and smooth structure.

Vestiges (3): West of the town, this terroir, which is slate-colored on the map, is one of the most arid in the region, with impoverished soil that requires a deep root system The terrain is covered by lauzes, flint-shaped white stones. The wines are dense, taut, and high in minerals, blended for fruity aromas and complexity.

Among attributes of wine, minerality is one of the most difficult attributes to define. I defer to the brilliance of Steven Spurrier, the UK wine legend:

“I suppose it (minerality) is easier to describe what it is not, that is, it is not fruity, nor acidity, nor tannins, nor oak, nor richness, nor fleshiness. I think it (minerality) is just there, a sort of lifted and lively stoniness that brings a sense of grip and a sense of depth, but it is neither grippy (which is tannin) nor deep (which is fruit).”

Voila, the diversity and complexity of Tavel to explore. Estates produce cuvées from grapes of all terroirs, as well as ones exclusively from a single terroir.

Tavel: A Rosé of Intimacy

A tasting of the Tavel rosés at Le Château de Manissy, Nov. 2016

The usual approach to drinking rosé is that it be seen first, and then sipped. Tavel, however, can not be seen that way. It demands an examination by sight, sniffing and tasting.

Tavel is luxurious and luminous, yet not precious. Approachable and affordable, it can take awhile to work its way into your consciousness.

Once it does, Tavel is a rose of intimacy, by which I mean it is filled with the detail of history, of elegant aromas and of a smooth richness that lingers in your mouth. And in your memory.

Where Tavel stands among roses is where it has always stood, and you carefully place its heritage where it belongs, before the rest.

There are dozens of other estates. Learn more about Tavel here.

Couleur Tavel is an annual festival when the town of Tavel quivers with excitement: music, art, theater, sublime cuisine and tastings galore of Tavel rosés from the appellation’s producers.

The festival runs from 4:00 p.m. until midnight on the third Saturday in July. Facebook here.

« For the Writer Jim Harrison, a Bandol Red of the Domaine Tempier Was His Reverie, His Lyric. » Frank Gehry at Luma Arles: A Lacerating Saga. Opening Set Back to Spring 2020