Arles: At the Grand Hôtel Nord-Pinus, the New Mayor Patrick de Carolis Can Save Jim Harrison from Sinking into Oblivion (tomber dans l’oubli)

September 17, 2019 By Bradbury in Culture, Société 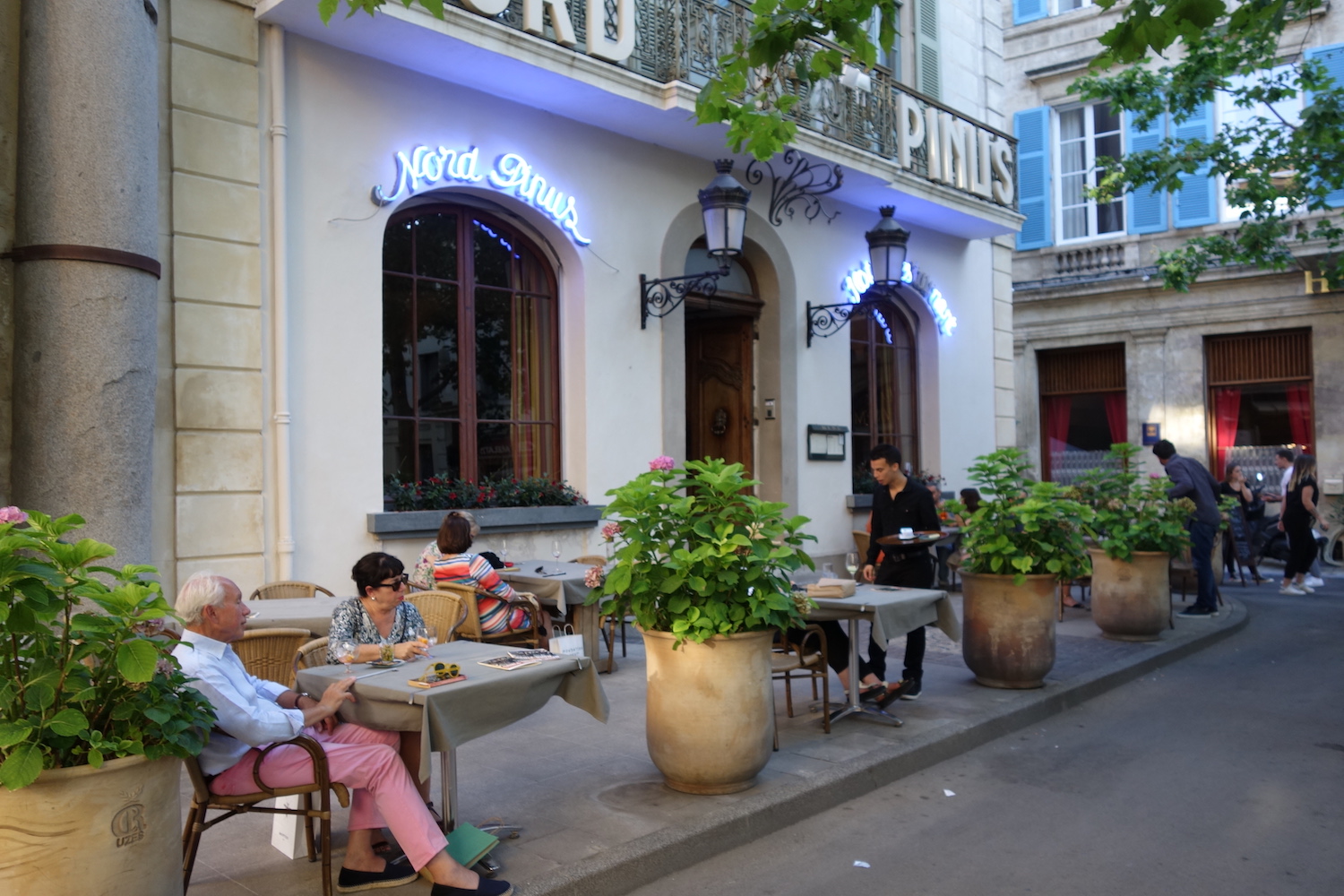 “We had a fine dose of the natural during a day in the Camargue, then made our way to Anne Igou’s Nord-Pinus in Arles, my favorite hotel in the world, bar none.” — Jim Harrison

When he passed away in March, 2016, Jim Harrison, the prodigious writer and poet, received in France the admiration once reserved for kings – a veritable tsunami of accolades and tributes in print and broadcast media. France mourned him as one of their own.

The year before, a French television crew had interviewed Jim in his western haunts to document his lust for life in wide open spaces and at the table (a pantagreulian appetite). French adoration begat a moniker: Le Mozart de la Prairie.

The love was mutual. “France is so well ahead in the not so matter of how to live life from day to day,” Jim wrote in his memoir, Off to the Side. His was an imagination colonized, fantastically, by wine and food.

And naturally, “..France became a retreat and relief,” where good food had become “a dominant solace in his life.”

By the mid-nineties, Jim wrote that he had been going to France twice a year, as his books were doing better in France than in America.

The writer Jim Fergus described how being in Paris with Jim Harrison was “like walking around with Mick Jagger.” Jim was “incredibly famous in France,” he added.

The L’Obs magazine asked Jim why the French shower him with such veneration. His reply:

“Why does a country choose to adopt a foreign writer?” Perhaps it is because I speak about the wild wide open spaces. The French do not need to hear about New York, since they already have Paris — a city much more interesting than New York.”

In an episode of “Parts Unknown” (S07:E04), shot with Jim Harrison in Montana, Anthony Bourdain evoked in perfect notes this sentiment:

“Some people must live in great spaces where the sky goes on forever. Where everyone must bend to the land.”

The Gravitational Pull of the Sud

The south of France, where olive oil replaces butter of the north, had a gravitational pull on Jim Harrison. When he felt the glare of social pressure in France, he would “run for cover in Arles or Marseilles.”

Jim Harrison drifted to the Bastide of Domaine Tempier in Bandol to mingle among the paragons of heightened culinary sensibility. For sixteen consecutive years, Jim ventured to the Domaine to taste the Bandol wines and Provençal cuisine of Lulu Peyraud, joined at times by Richard Olney, Alice Waters and Kermit Lynch. They were curators of a richly textured enjoyment, as Jim recalled:

“At one endless lunch with Olney and the wine importer Kermit Lynch and his wife Gail, a photographer, I tasted a fifteen-year succession of Bandols..”

There were trips to Collioure, near the Spanish border, to search for manuscripts of the poet Antonio Machado, and to delight in the “splendid wines” of Domaine La Tour Vieille that “killed the pain of gout and soothed sorrow.”

In an interview with Nice-Matin, Lulu Peyraud recounted that Harrison’s last trips to the south involved literary homages: one to the tomb of René Char, the poet, in L’Isle-sur-la-Sorgues in the Vaucluse, and a second to the burial grounds of another poet, Garcia Lorca, in Spain. 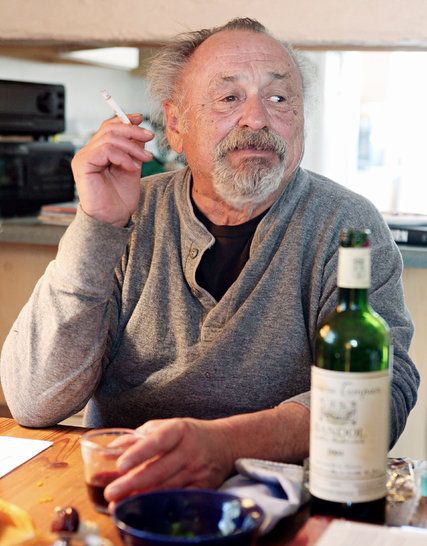 Jim Harrison in 2007 in the company of a bottle of red Bandol from Domaine Tempier Credit: Jeff Topping/The New York Times/Redux

It was in Arles where Jim’s soul was at ease. Perched on the Rhone, Arles is a town where every public surface wears a patina of antiquity and the vestiges of an ancient past dismantle modern memory into sepia tones.

What qualities did the worlds of the wild west and Arles share for Jim? The former was a world untouched, of hauntingly silent lands and distant rivers; the latter was a languid world, preserved with the faint resonance of the ghost of an earlier finer existence. Both detached from the modern day present; both soothing to Jim Harrison’s psyche.

Of Arles, Jim wrote of his fond attachment:

“I often go to Arles where I usually stay at a small hotel to write – The North Pincus. The hotel has rooms big enough to write there. It’s my favorite hotel in the world.”

“The effect of the south is immediate. Once while writing for a week at the splendid Hotel Nord Pinus in Arles, I became daily less somber and tormented so that what I wrote there was untypically jubilant. Doubtless if I wrote a whole novel in the south of France I would lose my winning reputation for melancholy.”

“The city with its overwhelming antiquity is containable so that you can walk its borders. The market is polyglot splendor, less bourgeois than the markets of Avignon and Aix-en-Provence, the vividness of which will crank up your appetite.”

“I have often thought that if I received an early warning that I would pass on sooner than later, I’d get myself to Lyon and eat for a solid month…. Maybe I’d swim all the way downstream to Arles for my last supper.”

An iconic landmark in Arles, the Grand Hôtel Nord-Pinus occupies a throne-like presence on the Place du Form, the town’s social hub.

It has the most charm for me when the Place du Forum is naked in winter months. (If you are looking for a hotel in the manner of a love affair, I prefer Le Clôitre, classy and quiet.)

In July, I drifted to the Nord-Pinus. The summer season brings tables crammed onto every flat surface on the Place du Forum.

I reacquainted myself to the hotel’s rich decor, and gazed at photographs of celebrities on the walls of the bar. Usual French icons. Jim Harrison’s image was absent. On the way out, I popped into the reception, and left my card with the receptionist with a link to an article that I had posted on Jim.

The next day, I had a meeting with a French publisher on the Place. Afterwards, I returned to the reception of the Nord-Pinus. My presence was greeted with a certain froideur.  A woman at the front desk was flippantly incurious about Jim.

I was flummoxed. The frosty reception did not correspond with recent memory. In 2017, I wrote to the management of the hotel to confirm some details of Jim’s sojourns in Arles. The response concluded with:

Then, there is an instagram post that I came across wherein a French woman, inspired by Jim’s memoir Off the the Side from which some of the above quotes are sourced, entered the hotel a few years ago and was received thusly:

In truth, his spirit (son esprit) is no longer present. Jim Harrison has slid into oblivion (tombé dans l’oubli) at the Grand Hôtel Nord-Pinus.

On leaving, the receptionist explained to me the reason: the hotel is under a new management. The new owner of Hôtel Nord-Pinus is Maya Hoffmann, the great patron of the arts, who is offering the magnificent Luma Arles to the city. 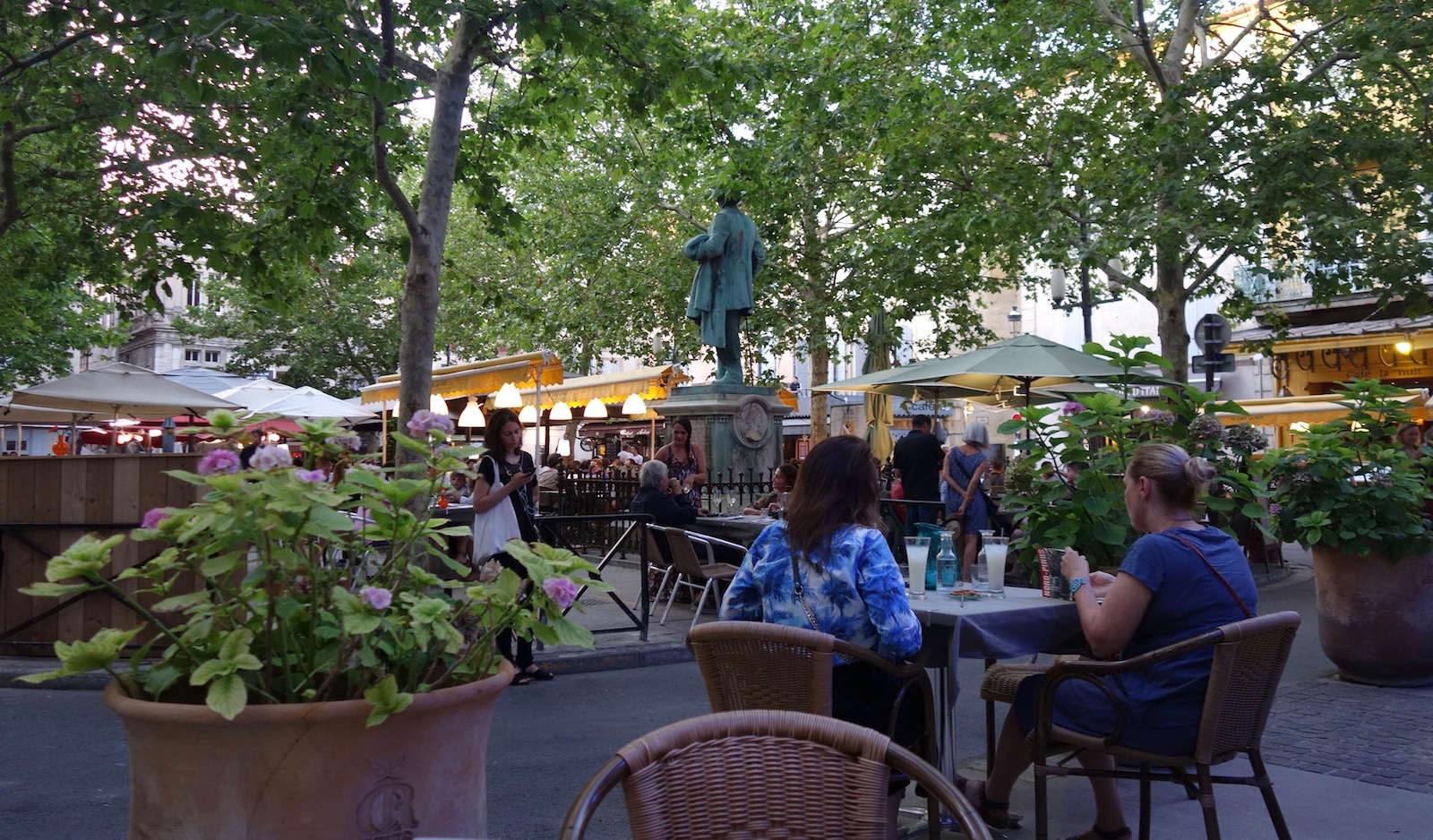 L’heure d’apéro in Arles. The Place du Forum from a table on the terrace of the Grand Hôtel Nord-Pinus.

In October, 2016, the Mayor Hervé Schiavetti presented the Medal of the City to Jim Fergus, who was in Arles for a reading of his new book at Actes Sud, the mega French publisher.

Fergus was introduced to Arles by Jim Harrison, and like Jim, adopted Arles as his preferred resting point (point de chute) in France.  At the Nord-Pinus, Fergus stayed in Jim’s designated room.

A dossier on Jim Harrison — his exalted affection for Arles and devotion to the Nord-Pinus — must be presented to the new Mayor of Arles, Patrick de Carolis.

Mayor de Carolis has the opportunity to heighten the cultural profile of Arles with a single gesture: memorializing Jim Harrison and son grand attachement to Arles with a plaque at the Place du Forum near the Grand Hôtel Nord-Pinus.  Jim l’aurait aimé!

Grand Hôtel Nord-Pinus at the Movies: Helmut Newton, the German-Australian fashion photographer, was celebrated for his vivid and erotically-charged images. In 1973, Newton shot a disrobed Charlotte Rampling at The Grand Hôtel Nord-Pinus, in room #10, imperishable images featured in a documentary released in July 2020: Helmut Newton – The Bad and the Beautiful, directed by Gero Von Boehm, and produced by MK2.