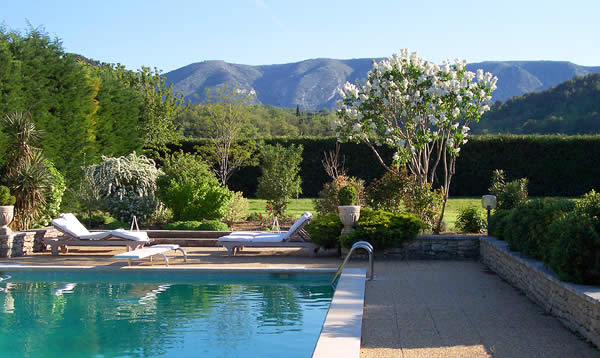 From the gardens of Le Mas du Magnolia, the perched village of Ménerbes appears as a large ocean liner floating in a sea of forest green vines, its bow elevated as if in a salute to the far-flung valley below.

Le Mas du Magnolia is a tony bed and breakfast with two acres of enclosed lawns and gardens. Guests indulge themselves at a large swimming pool, on shaded lounge chairs in the garden, and at a pool house with a private kitchen where they take meals at their leisure. 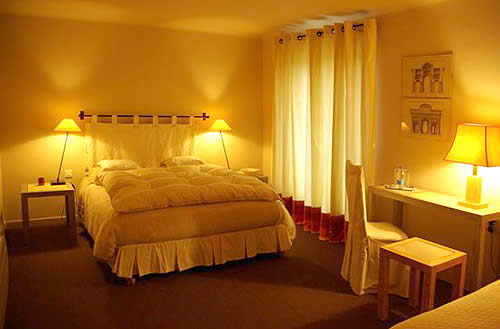 Of the four colorfully-decorated rooms at Le Mas, two can accommodate three people. Three rooms have their own private terraces. All have double beds, bathrobes, pool towels, and hair dryers.

Amenities include a sauna and the only putting green that PVB has ever run across at a bed and breakfast. A top flight golf course is nearby in Saumane.

Although it is one of the iconic perched villages in the Luberon, Ménerbes surprises you by its tranquil nature, an air of civility. Unlike Gordes or Roussillon, Ménerbes is bereft of activity in the summer months except for a monthly art opening or events at the Maison de la Truffe et du Vin.

The streets themselves in Ménerbes astonish: they have been repaved in a patchwork of square and rectangular stones of gray and gray-blue tones which are as smooth as the desk of, yes, an ocean liner.

In 1997, the philanthropist Ms. Nancy Negley, of Houston, purchased and completely renovated the Dora Maar House whose stately edifice addresses the Luberon countryside to the north. The Dora Maar House is affiliated with the Museum of Fine Arts in Houston for an artists–in-residence.

The nearby Domaine de la Citadelle, whose owner is the former mayor of the Ménerbes, produces excellent blends.

Directions: Going east on D900, exit at Beaumettes to Ménerbes on D29, which becomes D103. Le Mas in on your left as you approach the village.