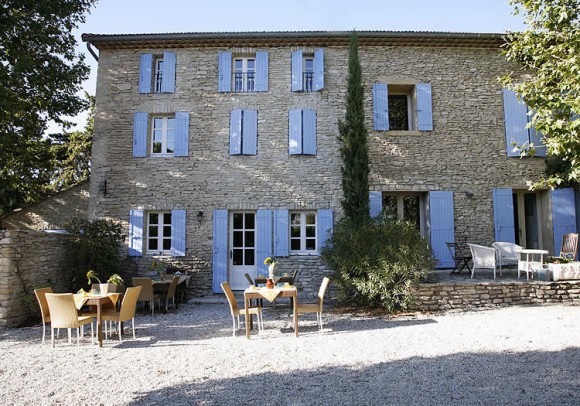 “It is something to do with the light, I suppose, and the airiness and bareness and frugality of life in the Midi, which induces a simplicity of thought, and a kind of whittling to the bone whatever may be the matter in hand. Sunlight reflected from red-tiled floors on to whitewashed walls, closed shutters and open windows and an air so soft that you live equally in and out of doors, suggest an experience so sweetly simple that you wonder that life ever appeared the tangled, hustling and distracting piece of nonsense you once thought it.”

A sobriquet for the town is “Venise Comtadine” (it is part of the Comtat Venaissin in the Vaucluse) as the Sorgue river divides into several canals which offer picturesque waterside strolling and dining.

On the northern outskirts of L’Isle-sur-la-Sorgue is Le Mas Des Busclats, a lovely 18th-century farmhouse wearing lavender colored shutters, framed by a well-manicured courtyard, a large swimming pool, and a verdant garden of more than an acre. 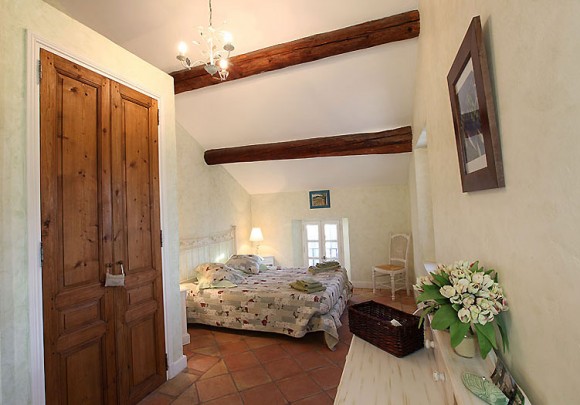 This tasteful bed and breakfast offers guests a choice of four colorfully-decorated rooms: two rooms have double beds, one has two single beds and a fourth three singles. Two of the rooms have a shower; two have a bath. The decor at Le Mas Des Busclats is pure Provençal, very smart mind you, and the bathrooms are likewise with modern fixtures.

In addition to tables in the pebble-covered courtyard, poolside and in the garden, there is a spacious salon for your petit déjeuner or dining.

For quality dining, the one-star Michelin restaurant Le Vivier is down the road towards L’Isle-sur-la-Sorgue.

Directions: Leaving L’Isle-sur-la-Sorgue via the Cour Fernande Peyre towards D938 to Carpentras, after roundabout, take Route D25 towards Fontaine de Vaucluse, and then immediately veer left on Route D178 to Saumane and follow to the Mas.